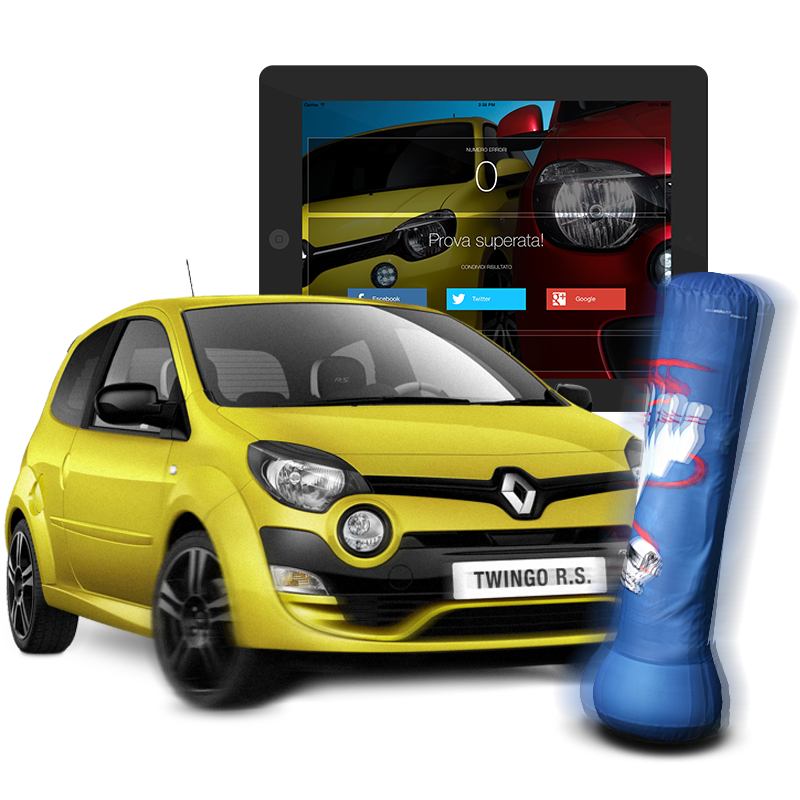 An innovative way to discover the agility of Renault's new Twingo hatchback: an interactive test drive with real time visual and tactile feedback.

Render a test drive of the new Reanult Twingo into an interactive and sensory experience.

In collaboration with Selected ADV, Hangloose created a test drive like no other. A slalom route with giant inflatable ninepins hooked up with wireless sensors was set up in the piazzas of major cities in central and southern Italy. We then placed an iPad on the dashboard of the new Twingo with a custom-developed native app installed in order to manage and monitor the test drive.

Each time a driver accidently bumps a ninepin he or she recieves both a visual warning (flashing siren) as well as a physical one (vibrating car seat). If a test drive is completed without any ninepins being knocked over, the driver can share his or her experience via Facebook, Twitter or Google+. An unconventional test drive for an unconventional car!

Step 1: The user is invited to take a test drive of the new Renault Twingo. 1 minute to navigate a circuit and avoid hitting several giant inflatable pins positioned at various points around the track.

Step 2: During the test an iPad positioned on the vehicle dashboard keeps the user updated on their progress, including number of pins hit and time left to complete the circuit.

Step 3: In the event of a collision with one of the pins the user receives both an optical signal (flashing light) and a physical one (seat vibration), all in real-time.

Step 4: The test ends successfully if the user is able to complete the circuit without committing any errors.