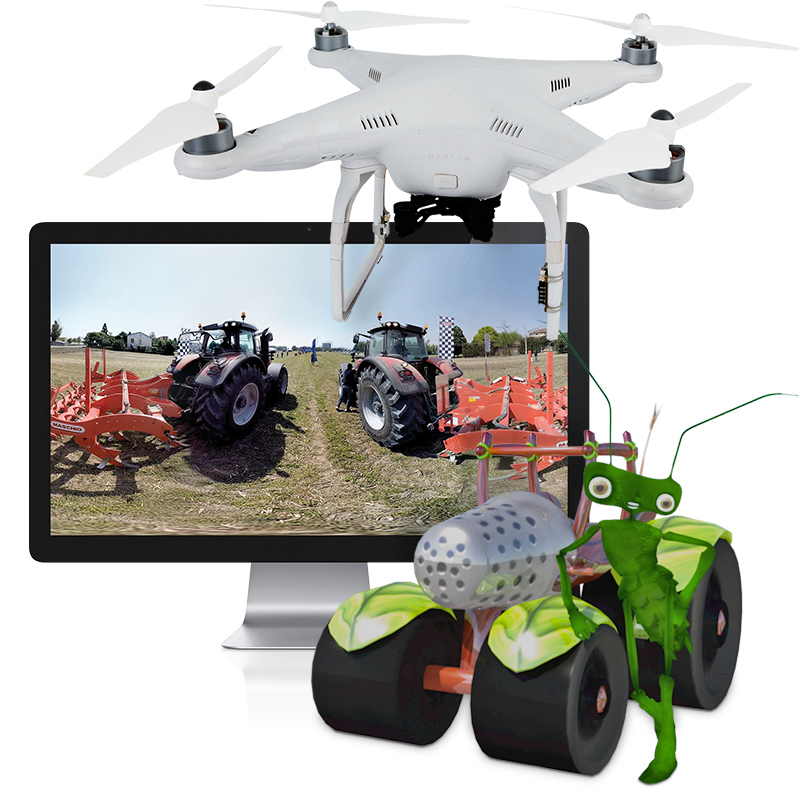 How to enhance the client's already strong technological and innovative positioning in the Agricultural and forestry Tires market while at the same time bringing the experience of the "Trelleborg Road Show" to international trade fairs.

Trelleborg has as its brand ambassodor Cricket, a friendly and quirky 3D character that engages in daring and fun adventures while showing the evolution of agriculture from the 1950s to the present day. These video productions are used throughout the company’s communication channels and during the international trade shows at which it participates.

In addition to Cricket’s adventures, Trelleborg also reaches out to its target market during its European Roadshow where it undertakes real-life demonstrations and performance tests of its agricultural tires.

Our goal was to unify these two experiences - the light-hearted world of Cricket and the serious business of its agricultural products - in an immersive 360 degree experience, utilising the latest technologies in virtual reality. The resulting format could then be exported around the world at Trelleborg’s various trade shows.

We first followed Trelleborg to a stop on their European Roadshow. Armed with a drone and GoPro rig we filmed a 360° video of a field test between two tractors operating on different tire pressures. In post-production info graphics were overalyed to help explain the results of the race and highlight the importance of choosing the right tire pressure by using Trelleborg's Load Calculator App.

We then completely redesigned the field test in a 3D environment with one important difference: the presence of Cricket and his rudimentary tractor. Through improbable shortcuts, jumps and a little help from a dragonfly, our unlikely hero wins the race!

An application was then developed in Unity which allows users to experience both races in a truely immerisve 360° environment via an Oculus Rift headset: the serious world of agricultural efficiency and the light-hearted world of Cricket come together, while at the same time promoting the Trelleborg brand.

In order to bring the new experience to the client's target audience, special 360° Oculus Rift corners were set up at Trelleborg stands at various international agricultural trade shows.

A minute and a half of thrills and entertainment through virtual reality: Trelleborg's brand ambassador Cricket participates in and wins the tractor field test with his makeshift vehicle. Storyboarded and developed from scratch using Maya 3D Studio, Unity and good old pencil and paper.

Allowing users to relive the experience of Trelleborg's European Roadshow via 360° videos. A field test between two tractors to highlight the importance of having the correct tire pressure and how Trelleborg's product can help improve agricultural efficiency.